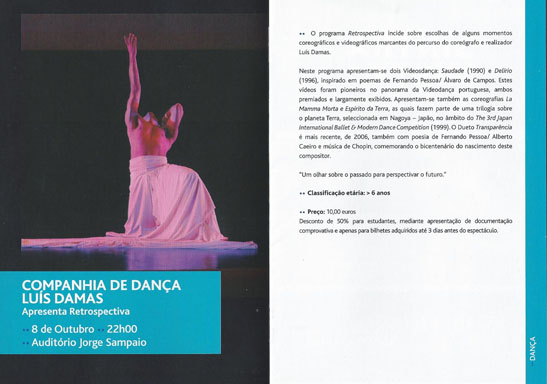 "Luís Damas Dance Company. A choreographic and artistic quality language in the world of dance." 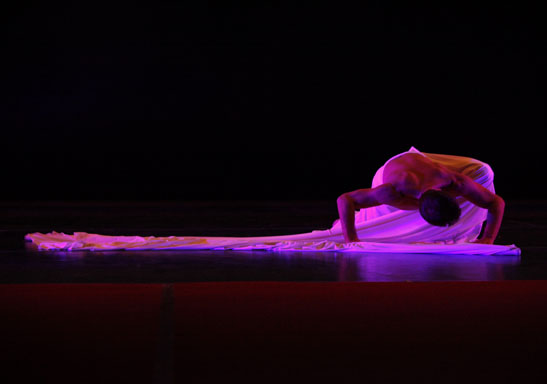 "(...) the CDLD dances are the mirror of artistic sensitivity and rigor that guide Luís Damas's choreographies and that result in shows of great quality and enormous aesthetic beauty."

The Luís Damas Dance Company (CDLD) of the Cultural Association Xpressodança, created in mid-2010 as a projects company, recently headquartered at Forum Lisboa with the support of the Lisbon Municipal Assembly/Lisbon City Council, has maintained a very significant regular job since then, as well as diversified and relevant in the context of contemporary dance in Portugal.

Parallel to its performance in large theaters such as the Olga Cadaval Cultural Center, Garcia Resende Theater or Culturgest, in original or singular partnerships, CDLD has creased its territory, encompassing and promoting multiple other possibilities as well.

Among other performances, the participations in the Gala of the World Dance Day 2011 at the invitation of the Oeiras Dance Center, and the performance of shows within the scope of the Week of Dance in 2012 and the Celebrations of the World Dance Day in 2013 at the invitation of the Municipality of Oeiras, at the Eunice Muñoz Municipal Auditorium. In March 2012, it presented itself to the Lisbon Municipal Assembly, at the Lisboa Forum, and in June of the same year at the Fernando Lopes Graça Municipal Auditorium/Parque de Palmela, at the invitation of the Cascais Municipal Council. Also participated in the solemn sessions of the 95th and 96th anniversaries of the Parish Council of S. Jorge de Arroios in 2011 and 2012, which took place at the Camões Auditorium and at Fonte Luminosa, respectively.

At the end of June 2012, CDLD went international, performing at Teatro Titano, in the Republic of San Marino, as part of the 32nd World Congress on Dance Research 2012, CID-UNESCO.

Continuing its perspective of decentralization, the Company performed at the Castro Verde Cine-Theater at the invitation of the City Council, and at the New Cycle Acert in Tondela.

It also performed in alternative spaces, underlining its brand in other auditoriums, school and municipal, such as the Camões Auditorium and the Orlando Ribeiro Municipal Library Auditorium, where it performed regularly every year. Also created, promoted and carried out a long didactic work with students of all ages, contributing to their artistic education, including the elderly in the target audience, namely in the Lisbon Forum itself. Performed choreographic workshops at the Ginasiano Dance School in 2011, and at the Padre António Vieira High School in 2013, the latter with the aim of providing new horizons to regular school students.

It was a patron in some of the most disadvantaged contexts, supporting various cultural initiatives in different ways and whenever possible.

CDLD distinguished itself not only for the originality of its choreographic works but also for introducing a new standard of multidisciplinary presentation in its shows, namely VideoDance, in pioneer works, awarded nationally and internationally.

Initially choosing to recreate choreographies for CDLD, Luís Damas remounted some outstanding moments of his choreographic path, recognized in the country and abroad, later advancing to new choreographic and videographic creations.

In this short period of time, CDLD knew how to create multiple supports and partnerships that contributed momentarily or more continuously to make its objectives achievable, now intending to broaden and build a base of even stronger ties for future projects.

Until the beginning of 2016, CDLD embarked on an in-depth research work that culminated in a residency in France for three months and then a whole structuring and assimilation of the contents covered.